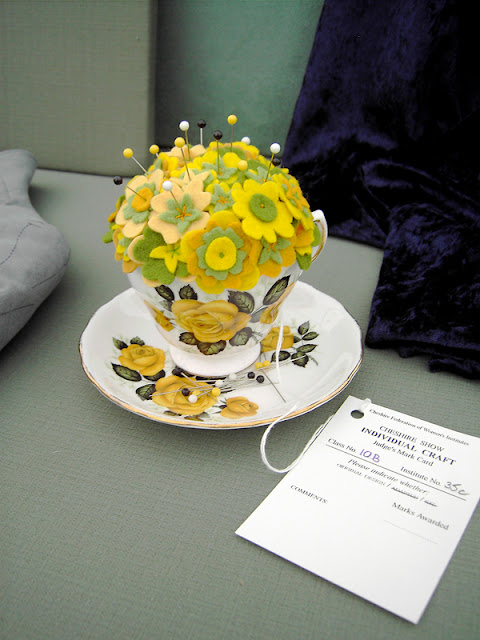 The Cheshire WI have a huge marquee at the annual Cheshire Show held in Knutsford and for many it's the main even of the year.  WI members are asked to compete in different categories, ie Baking, Craft, Flower Arranging, Preservation etc.  You can enter as an individual or as a group.  I decided to enter into the spirit and have a go at craft and baking.  This years theme is 'Books Books Books'
My Craft entry is this pin cushion which took for ever but I found I had lots of time recently traveling up and down to london on the train so that helped.  The title of this category was 'A Modern Classic' and hopefully I've interpreted the title well.  I shall find out tomorrow how I've done, let's hope they're not too critical!
Here's how I did it......... 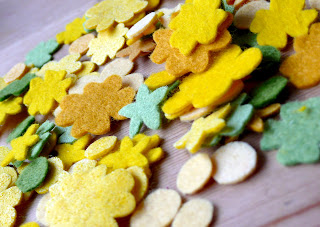 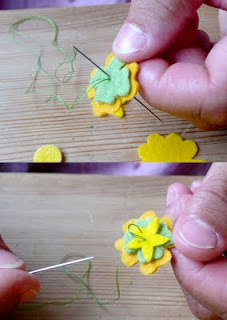 First I had to make the flower layers.  I drew each flower onto 'Bondaweb' from a template then ironed it onto felt.  Next each flower was cut out and the "Bondaweb backing removed, I used nail scissors to cut them out as they were so small and fiddly.  Then began sewing each flower together. 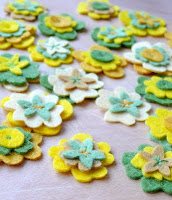 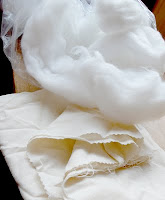 Once the flowers were complete I made a cushion from wadding and muslin to fit inside the tea cup. 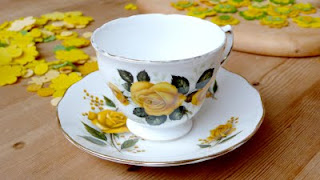 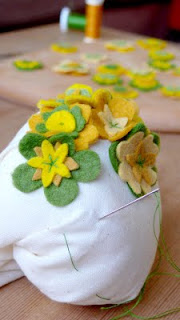 I then had to sew the flowers onto the cushion and fixed the cushion into the cup with hot glue.  I also used hot glue to fasten the cup to the saucer
UPDATE - I scored 14 out of 20 and they made the comment that I should have used "More technique, more points"........Well I love it.
Baking for The Cheshire Show
The baking categorie was titled 'Sugar, Spice & All Things Nice' and I made my friend Katrina's apple cake.  I've been looking for a good apple cake recipe for about a year and then whilst at Katrina's one evening she appeared with just what I 'd been searching for.  It's so moist and has big chunks of apple running through it with a few sultanas thrown in for good measure.
I'm sure the WI experts will have something to say about it not being very neat or the fact that they can see marks from the parchment lining the tin but I'm happy with it and like it's rustic-ness.  Everyone who eats it loves it too, including a couple of people I met in London recently! 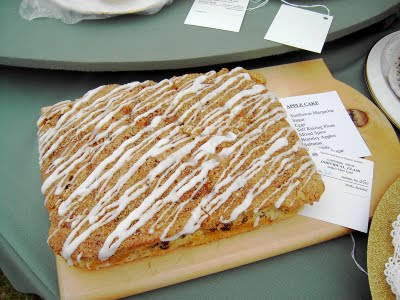 APPLE CAKE RECIPE
150g Butter
150g Sugar
3 Eggs
250g Self Raising Flour
1 tsp Mixed Spice
4floz Milk
100g Sultanas
2 Bramley Apples peeled, cored and chopped into chunks
Cinnamon
Demerara Sugar
Throw everything apart from the apples, cinnamon and demerara sugar into a mixer and combine.  Fold the apples through and transfer to a 10" x 8" roasting tin lined with parchment.  Sprinkle over some cinnamon and enough demerara sugar to cover it.  You want a nice crust when it's cooked.  Bake for about 45-55 minutes @ 180C or 160 fan oven / 350F / Gas 5.
I've drizzled over a little lemon icing but it's also great left plain and eaten with custard

UPDATE - I scored 15 1/2 out of 20 for the cake.  They don't explain how they score unfortunately, it would be helpful.
Wirral Belles at The Cheshire Show

My WI, Wirral Belles also entered two group categories.  The first was titled 'A Travelers Tale' and it's the largest category you can enter needing six different items to display.  Everyone thinks we've been "very brave" as first timers to enter such a comprehensive class but it's a bit all or nothing with us and we thought if we were going to do it we may as well do it big time.
Our chosen book was 'The Lion, The Witch & The Wardrobe' and We are all so pleased with what we came up with, especially for first timers.  We had The Snow Queens tiara, A chocolate log, forest fruits jam and a knitted lion 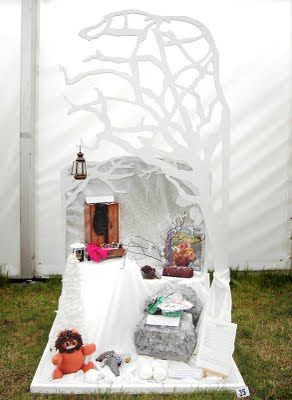 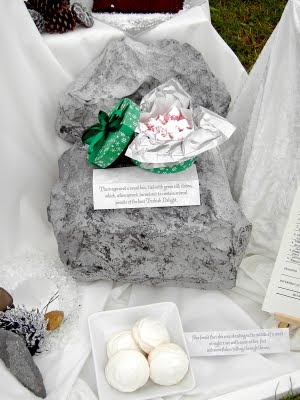 My contribution was a box of turkish delight - what a nightmare to make, I shan't be doing that again in a hurry and some meringue snowballs.  Oh, I also made those papier mache rocks that will be featuring in Archie's school play on Thursday.
The second category was smaller with just three items to display and was titled 'Holiday Guide'.  We of course chose Wirral and had a mini beach to exhibit everything.  I made the ice-cream cupcakes and we also had a shell charm bracelet and a fabric picture.

UPDATE - We did so well and are very proud with the results.  The Narnia piece scored 120 1/2 out of 160 and the Wirral piece scored 52 out of 80.  They really loved the staging and interpretation and we got full marks for both, infact we were in contention with another WI for the special staging award.

Can't wait till next year, we'll be more sussed about it all and they won't be able to stop us. 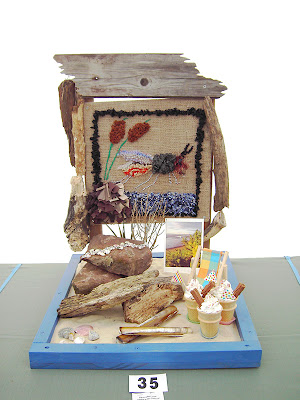