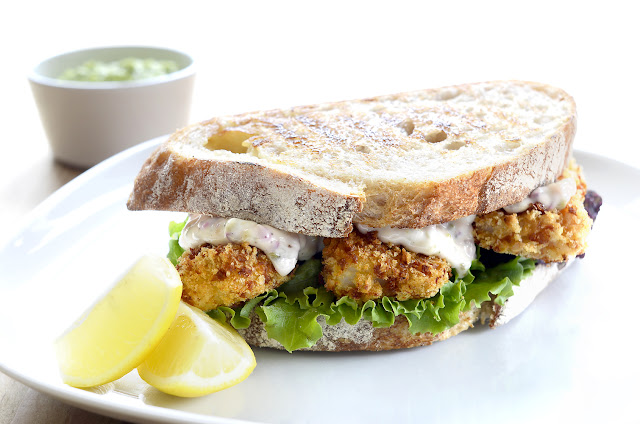 Recently I gave my children fish finger sandwiches for dinner and felt a slight tinge of guilt for not giving them something 'proper'.  The problem was, they were quite delicious and I found myself craving one for myself.  A definite guilty pleasure.

It got me to thinking though, perhaps I could compensate for my lapse as a good mother by creating the perfect fish finger sandwich from scratch rather than a frozen packet, I even made the tartar sauce and some accompanying mushy peas.  It worked and by golly it was heavenly, guilt gone and I am a good mother again.

I used Hake, not the traditional choice but this lesser used fish is just as good as cod and to get that customary orange crumb I've dry fried some chorizo then whizzed it with the bread to make the bread crumbs.  There is enough oil in the chorizo to then just bake them in the oven - simples!

First make your bread crumbs.  Cut the chorizo into slices then each slice in half.  Dry fry them in a pan and allow to cool a little.  Put your bread in a processor along with the chorizo and whizz them into crumbs.  The chorizo will excrete a lovely orange tainted oil into the pan, stir the crumbs into this till combined.

Wash and pat dry the fish in some kitchen roll then cut them into fingers.  Dust each one in flour then dip in the egg.  Now coat the fish finger in the bread crumbs.

Place them on a baking sheet and cook for 20 minutes at 180C. Serve in buttered slices of crusty bread such as Pain de Campagne with tartar sauce and mushy peas on the side. 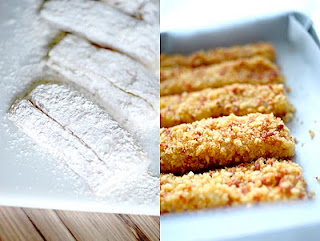 Chop everything finely and mix it all together.  I have to admit that capers are on my very short list of foods I can't bring myself to eat so I didn't put them in and I could tell it wasn't quite right.  So if you don't have the same aversion, keep em in. 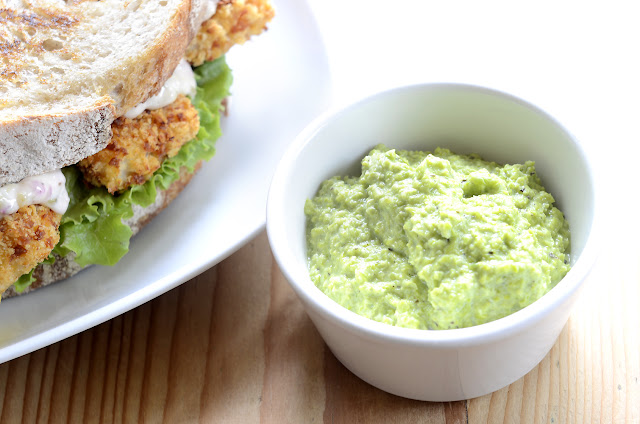 Boil the peas in hot water, drain and whizz them in a processor with the remaining ingredients.  I didn't process them too much so there was some texture and not baby food

By yasminlimbert at 08:45 No comments: