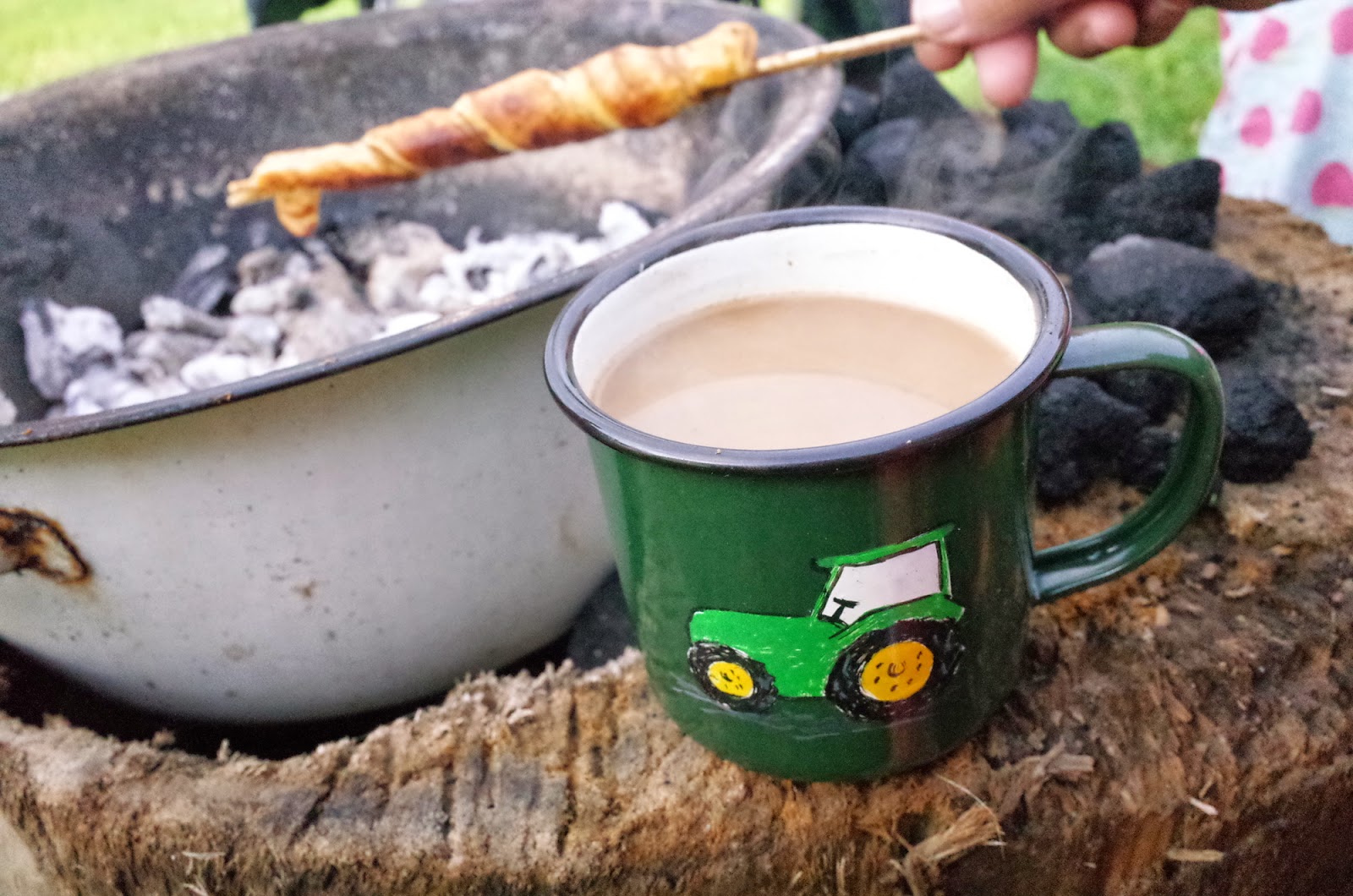 My family and I spent the last week of September on a hill in Somerset with the most glorious views of the Cheddar Valley on the edge of the Mendip Hills.  For this trip I wanted to make meal times all about the camp fire and not just the usual barbecue, so before we went I searched for ideas and these are some of my favourites.

This post may be a little late in the year for some but we have been known to camp for halloween before now.  You could of course just save them for next summer and get ahead of the game.

All the recipes have ingredients that don't take up much packing space or can be easily sourced in most supermarkets or grocery stores that you would find near your camp site. 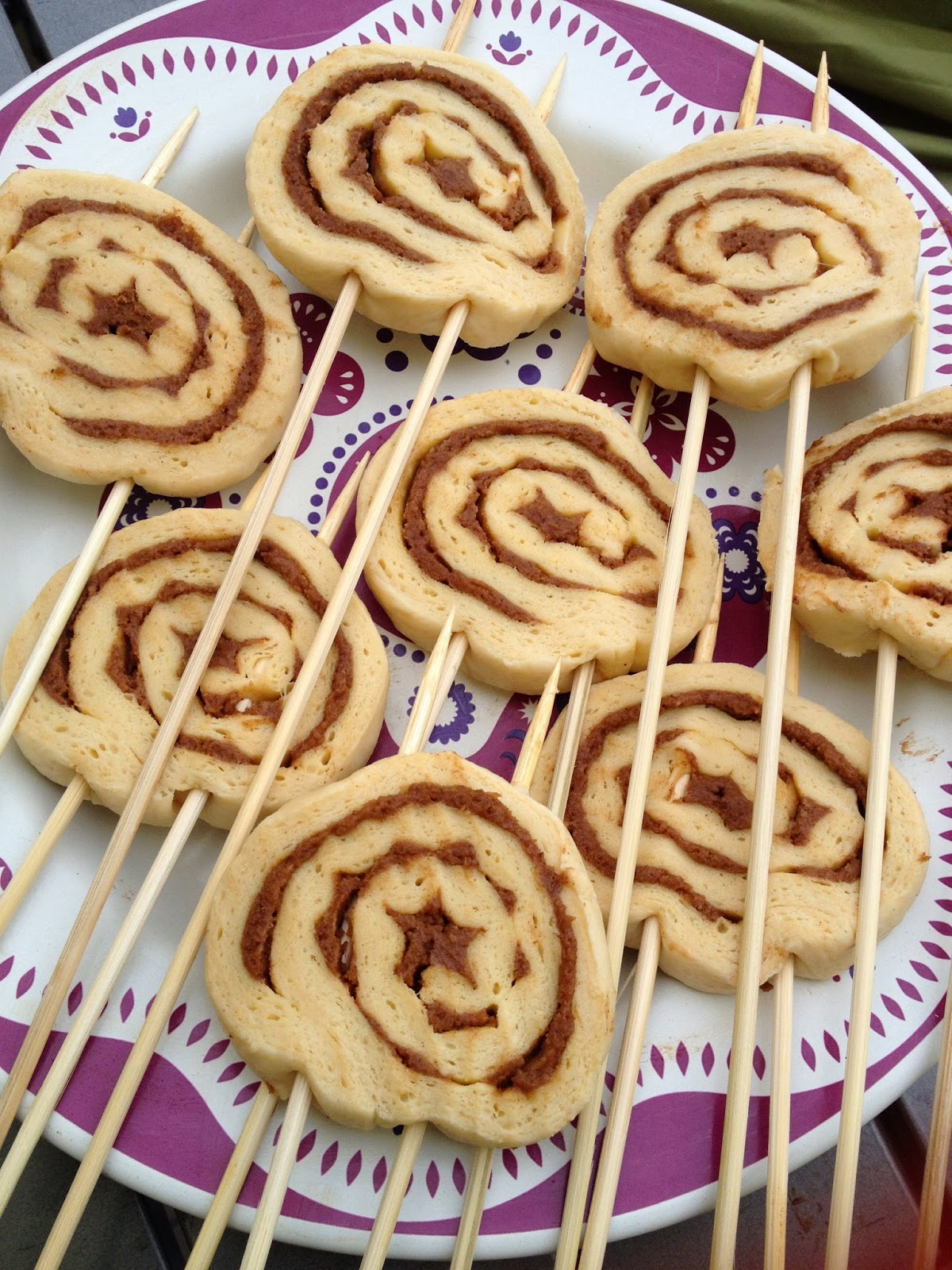 Anything with cinnamon is good in our house so having these freshly baked was always going to be a winner.  You use the 'Jus-Rol' Cinnamon swirls and it makes about 8 or nine depending on how deft you are at slicing. 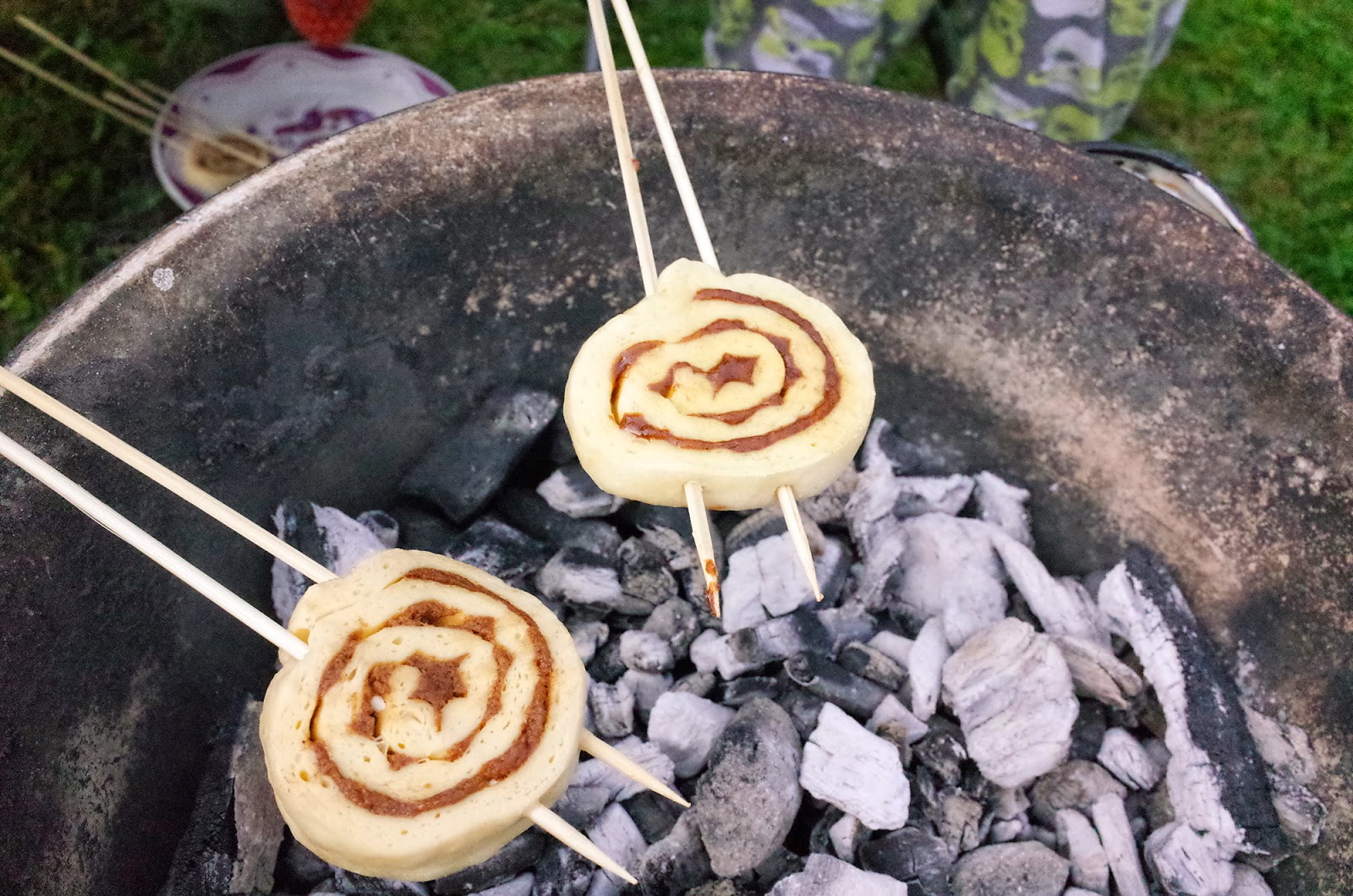 The original idea I found suggested unrolling them and wrapping them round your skewers but I found this got a little messy.   As you get more into the roll the cinnamon butter would be on both sides of the dough and it was also easier to burn before the dough was cooked.  So slicing and pushing through 2 skewers to make it easier to turn was the way forward for me. 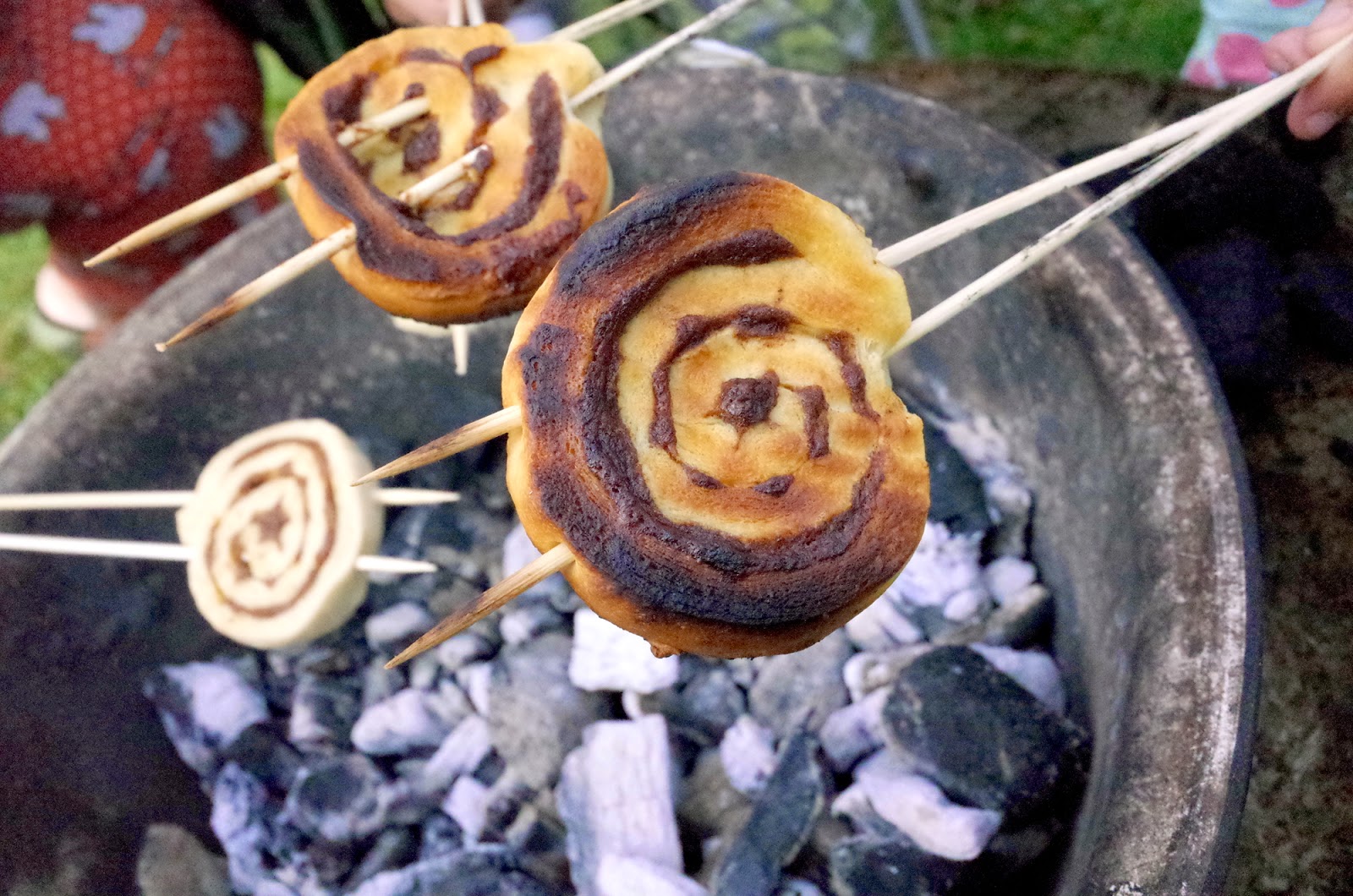 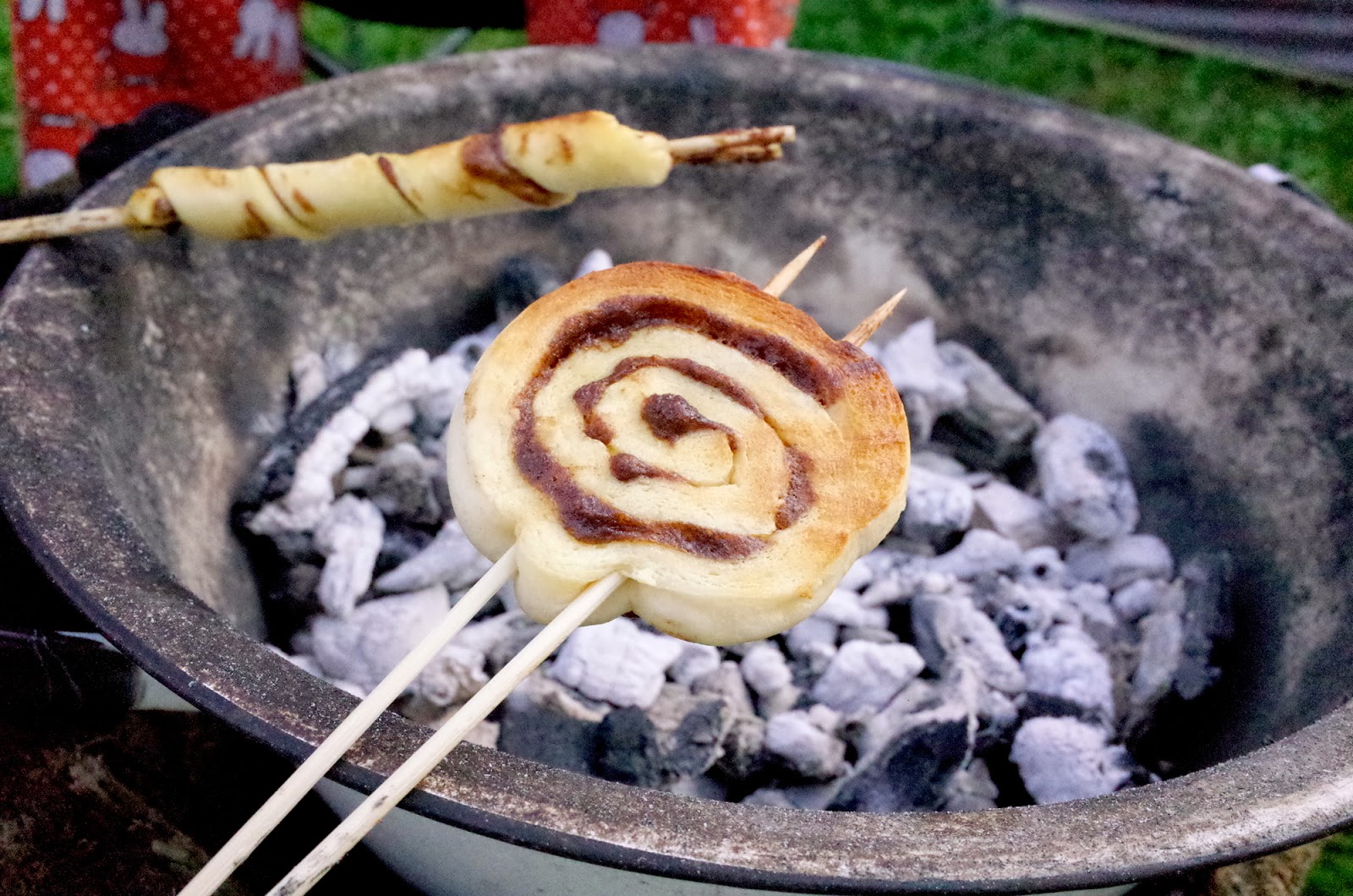 They take roughly 5-8 minutes and puff up beautifully.  Everyone cooked there own which make it all the more satisfying to eat. 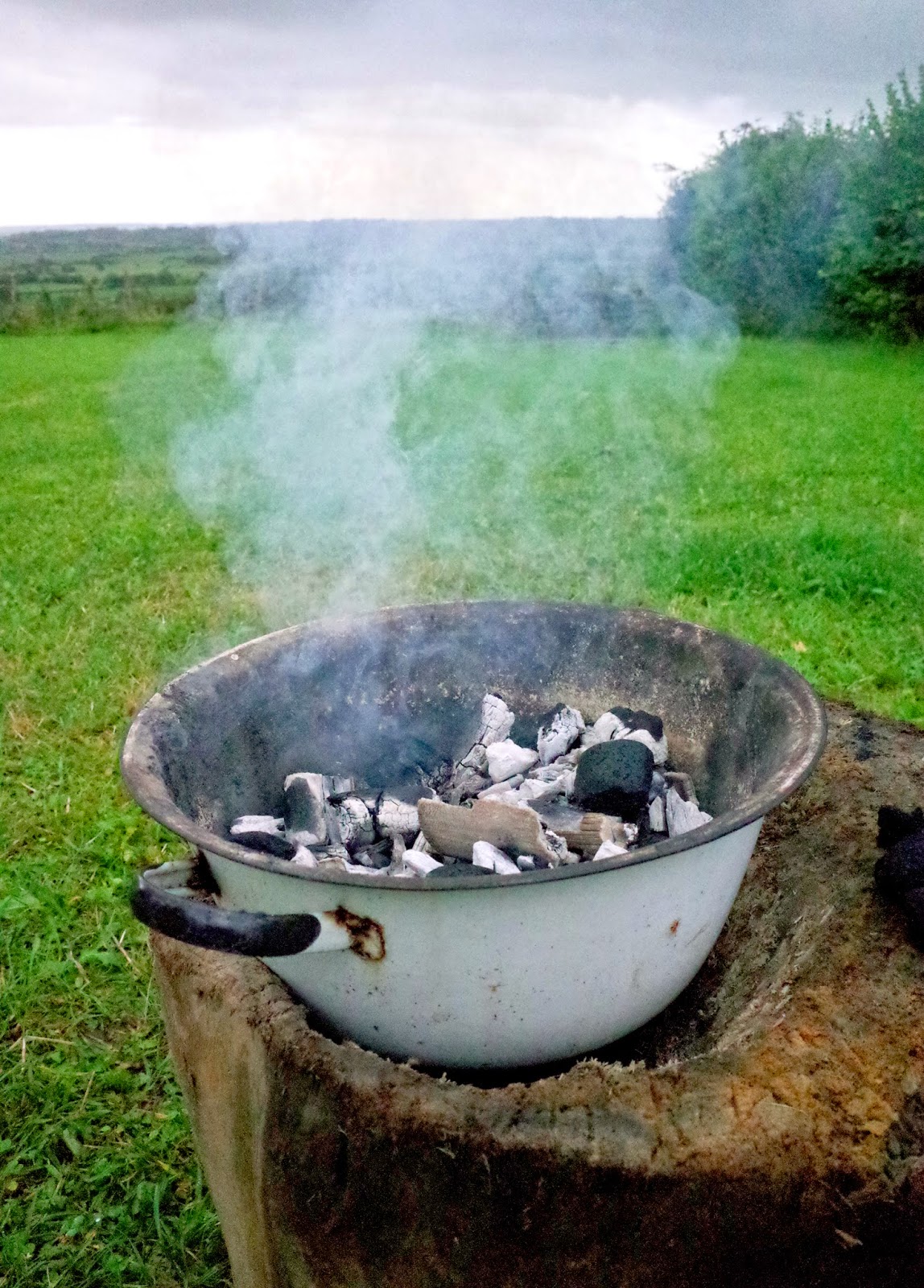 Hot dogs is of course de rigueur on a barbecue but these come ready wrapped in their buns thanks to 'Jus-Rol' (yes again) croissant dough. 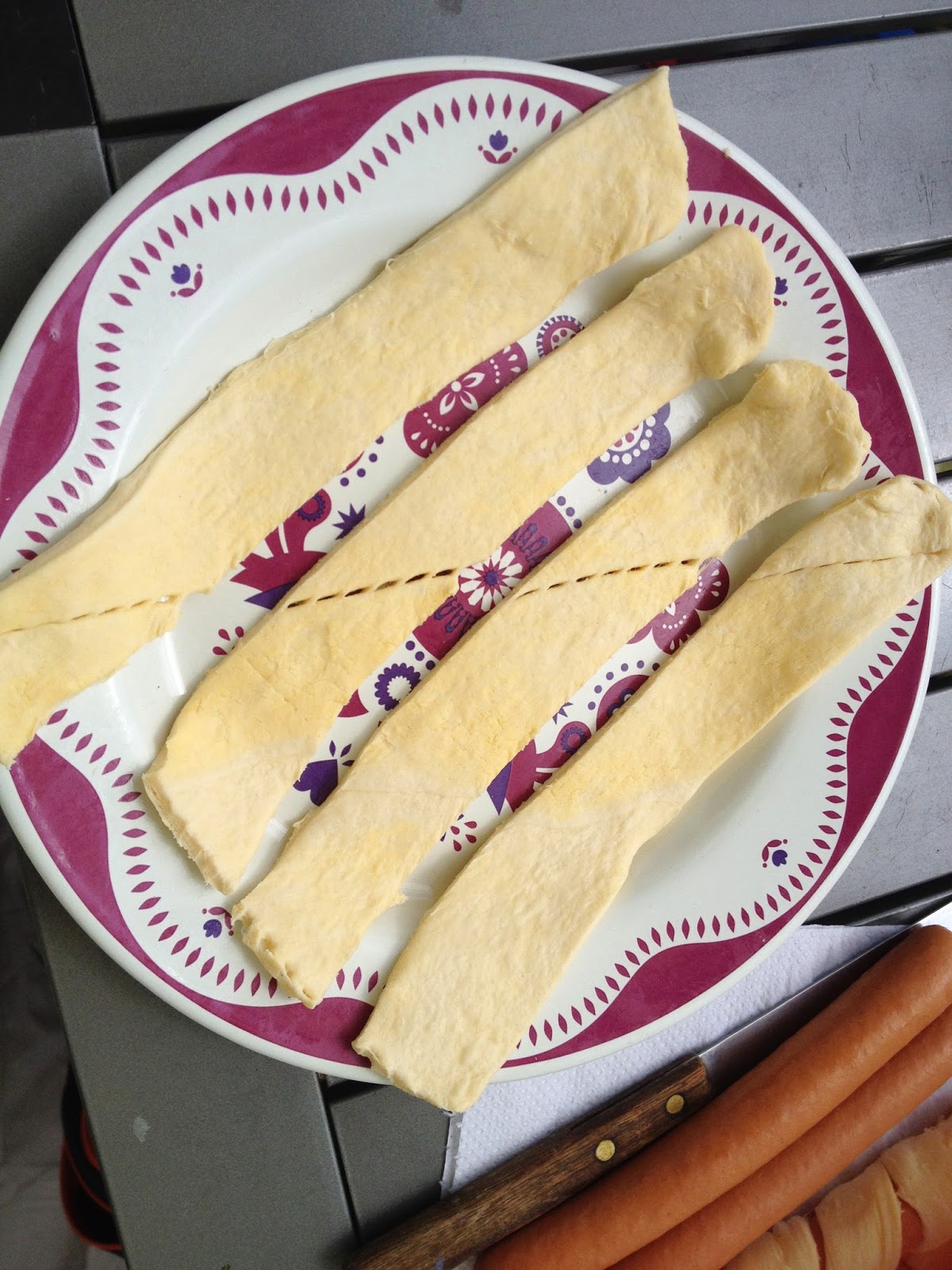 Pop the roll open and unravel the first two croissants keeping them in tact, ignore the dotted cutting line and cut them into four long strips 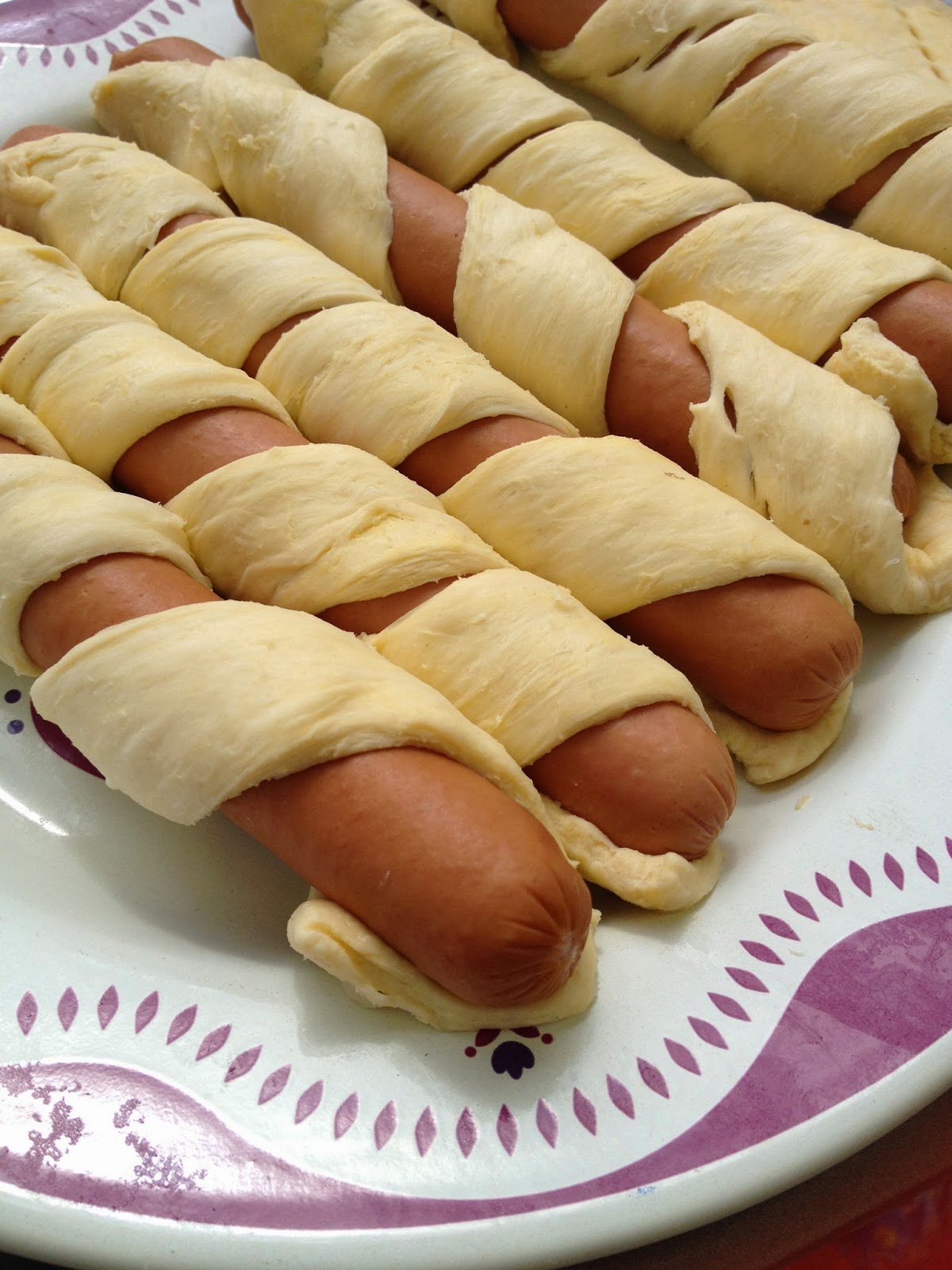 Push a skewer through your hot dog and then wrap one of the strips around it stretching it slightly as you go. 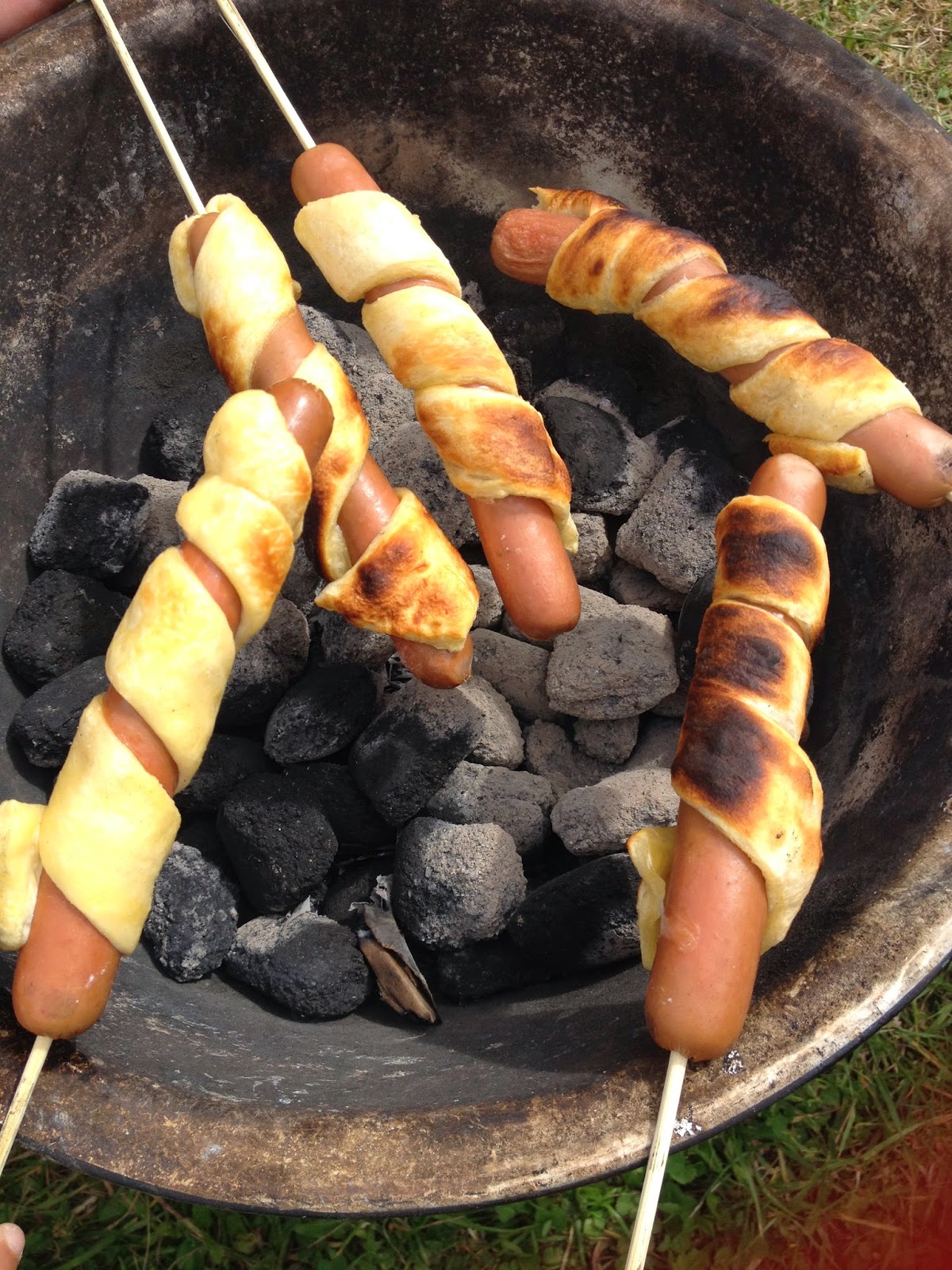 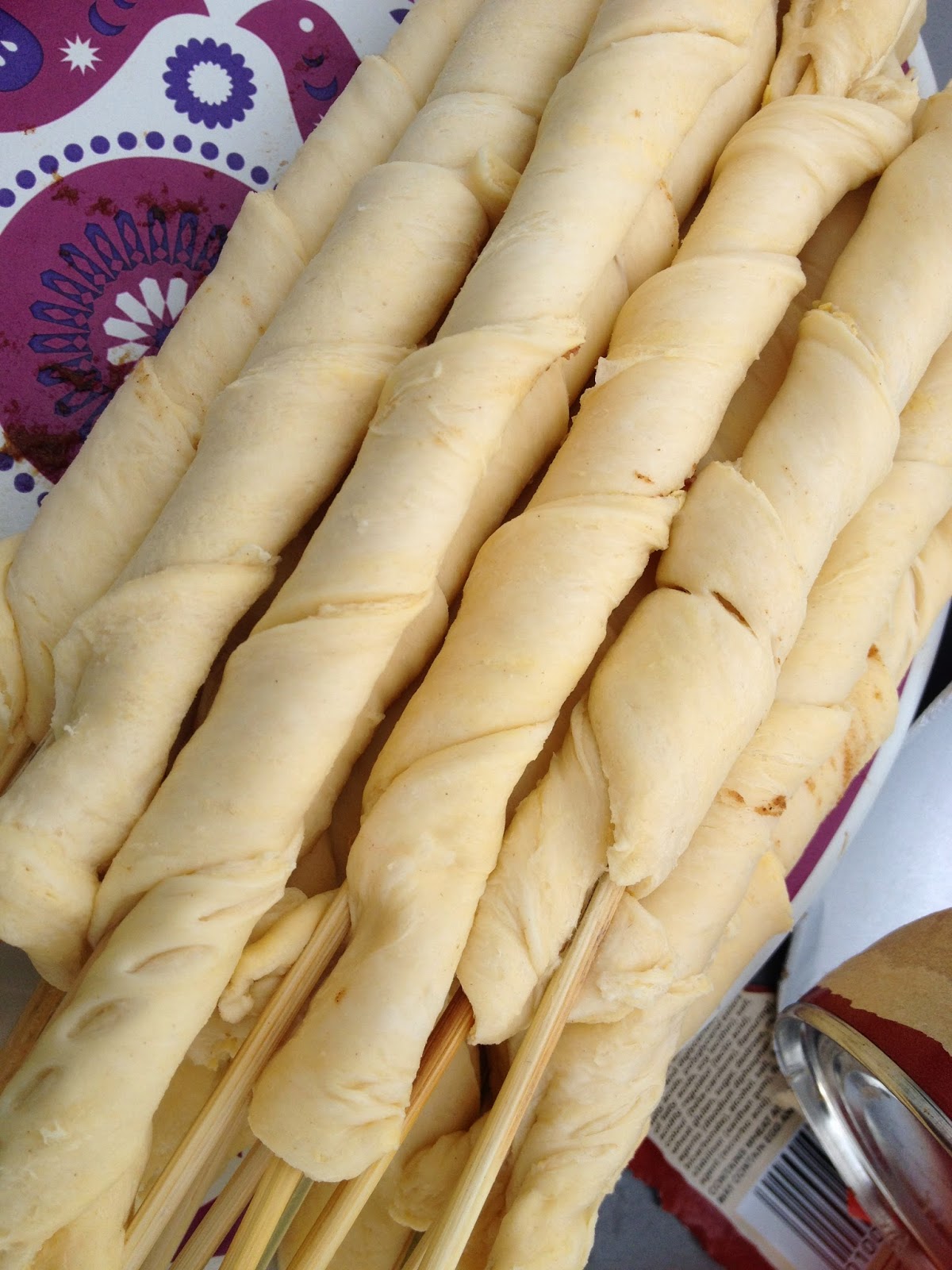 You can also make dampers with the same dough.  Traditionally these are bread dough wrapped around a twig but for fear of poisoning us with the wrong type of twig I've gone with skewers and stuck with the croissant dough. 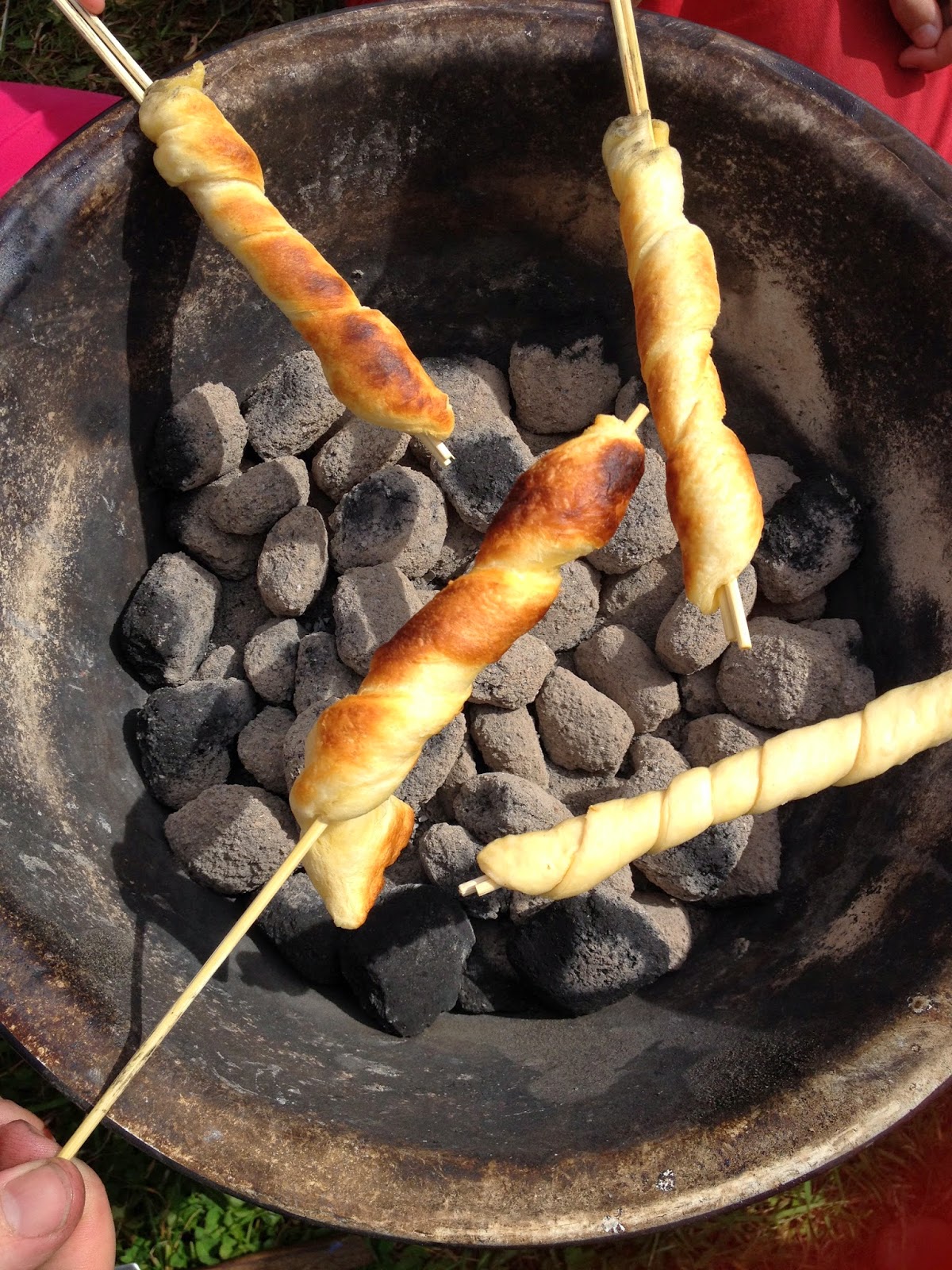 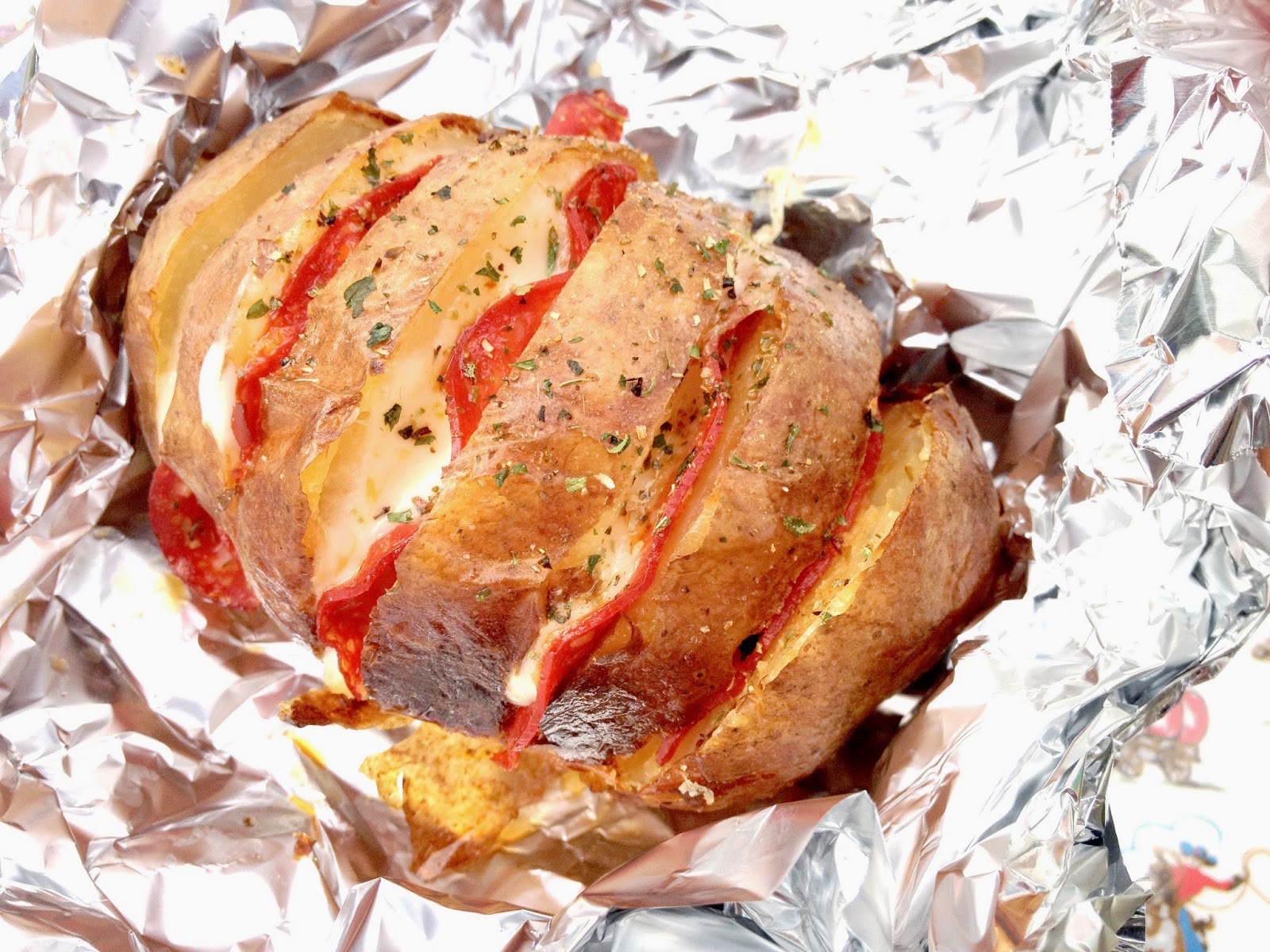 This is where foil truly comes into it's own.  This trip has made me realise that I really can't do without it when camping.

For this dish I took potatoes that I'd baked at home and we had them on the first night but you can now buy frozen jacket potatoes in the supermarket - I've always been appalled at this idea but for this it has it's benefits.

Cut slices into the potato without cutting all the way through and fill each cut with cheese and ham,  in fact I've used buffalo mozzarella and chorizo. 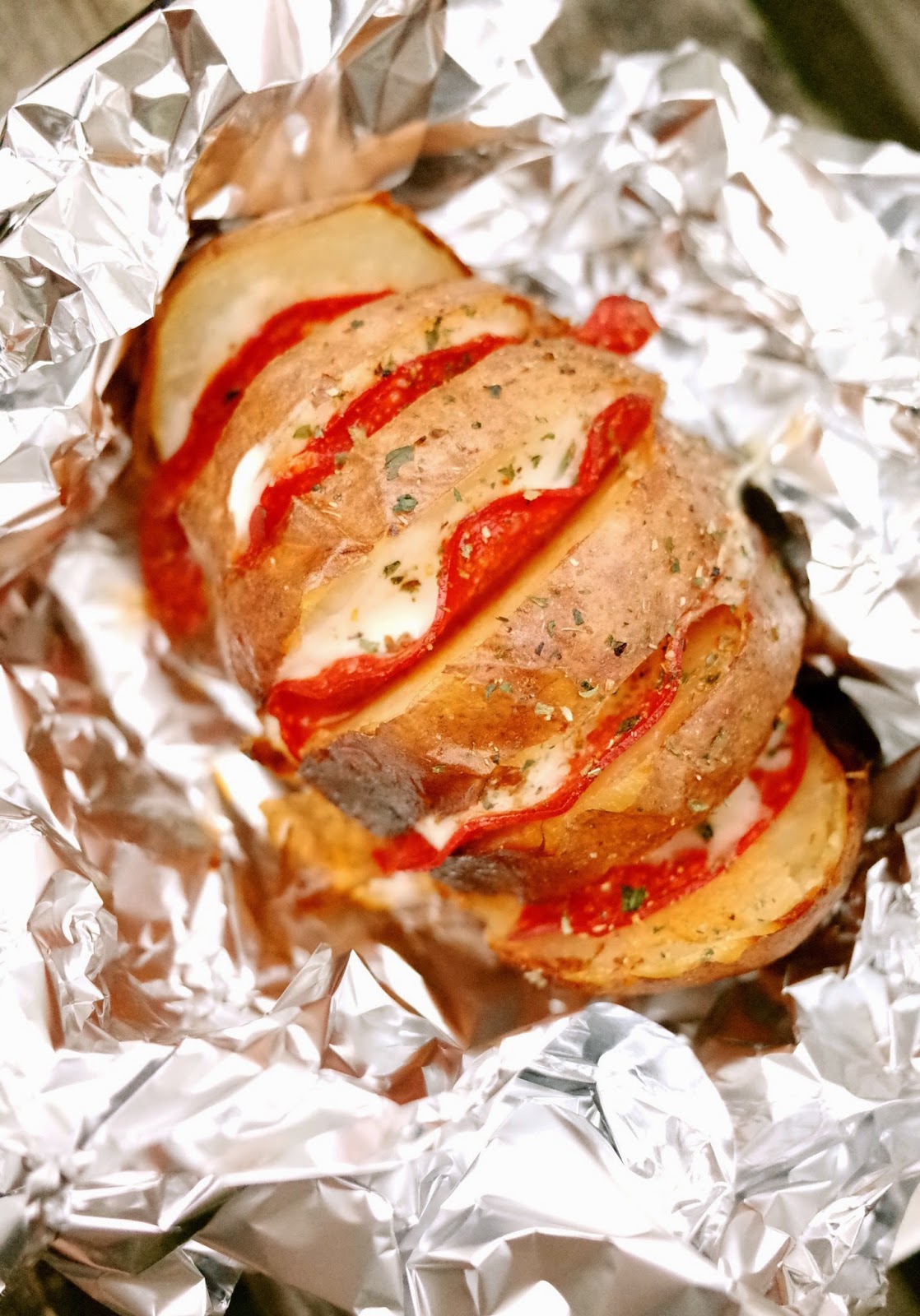 Wrap the potato in a double layer of strong foil and then sit it in the coals of your fire.  I gave it about 10 minutes by which time the spud is hot and the cheese has melted, voila!

You've got to have pudding and even I get a bit bored of toasted marshmallows and S'mores.  I really can't tell you how delicious this is, I can see me building fires in the garden just so we can have it again soon. 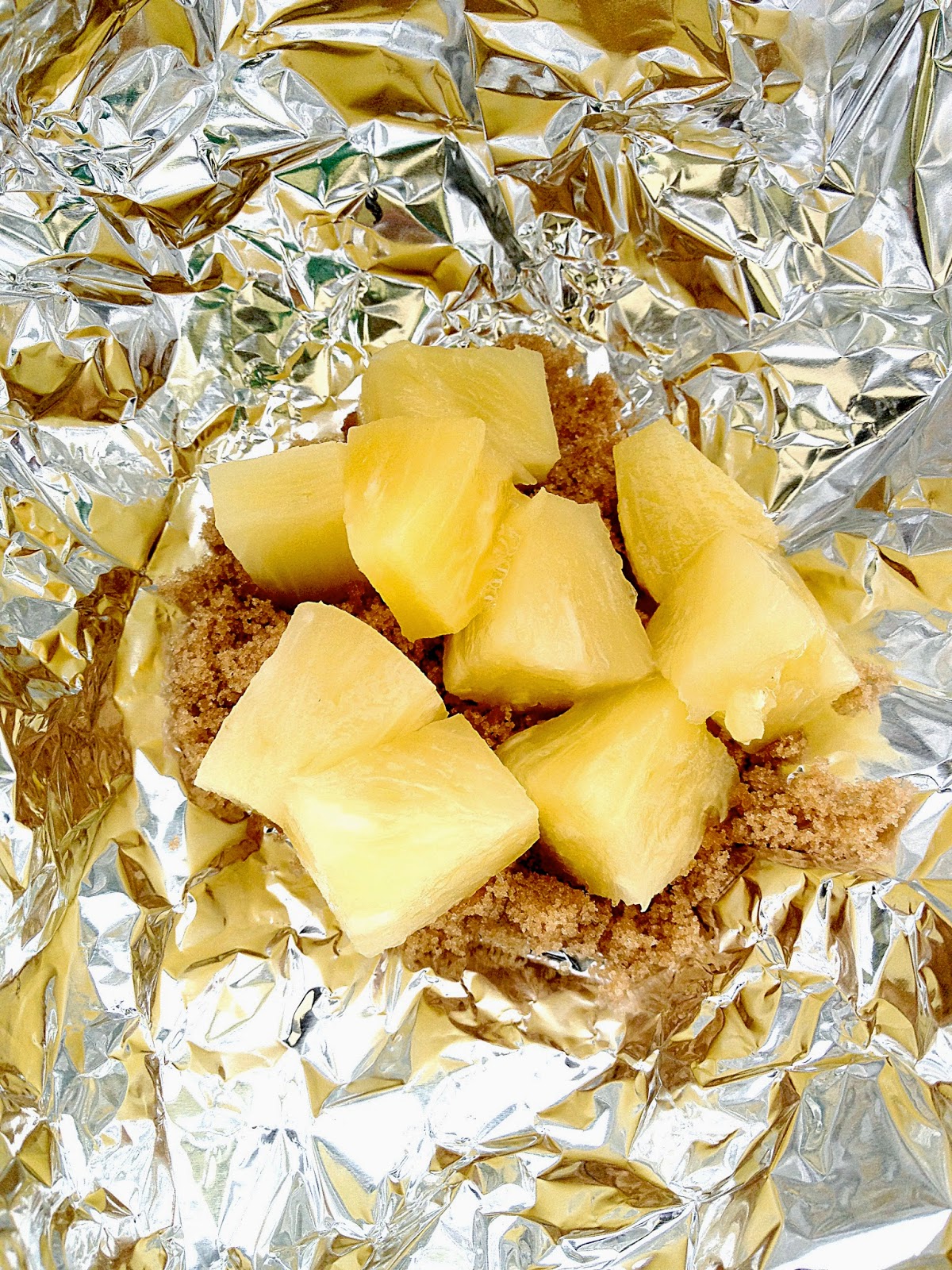 Use a double layer of strong foil, place a generous tablespoon of soft brown sugar in the centre and top with fresh or tinned pineapple 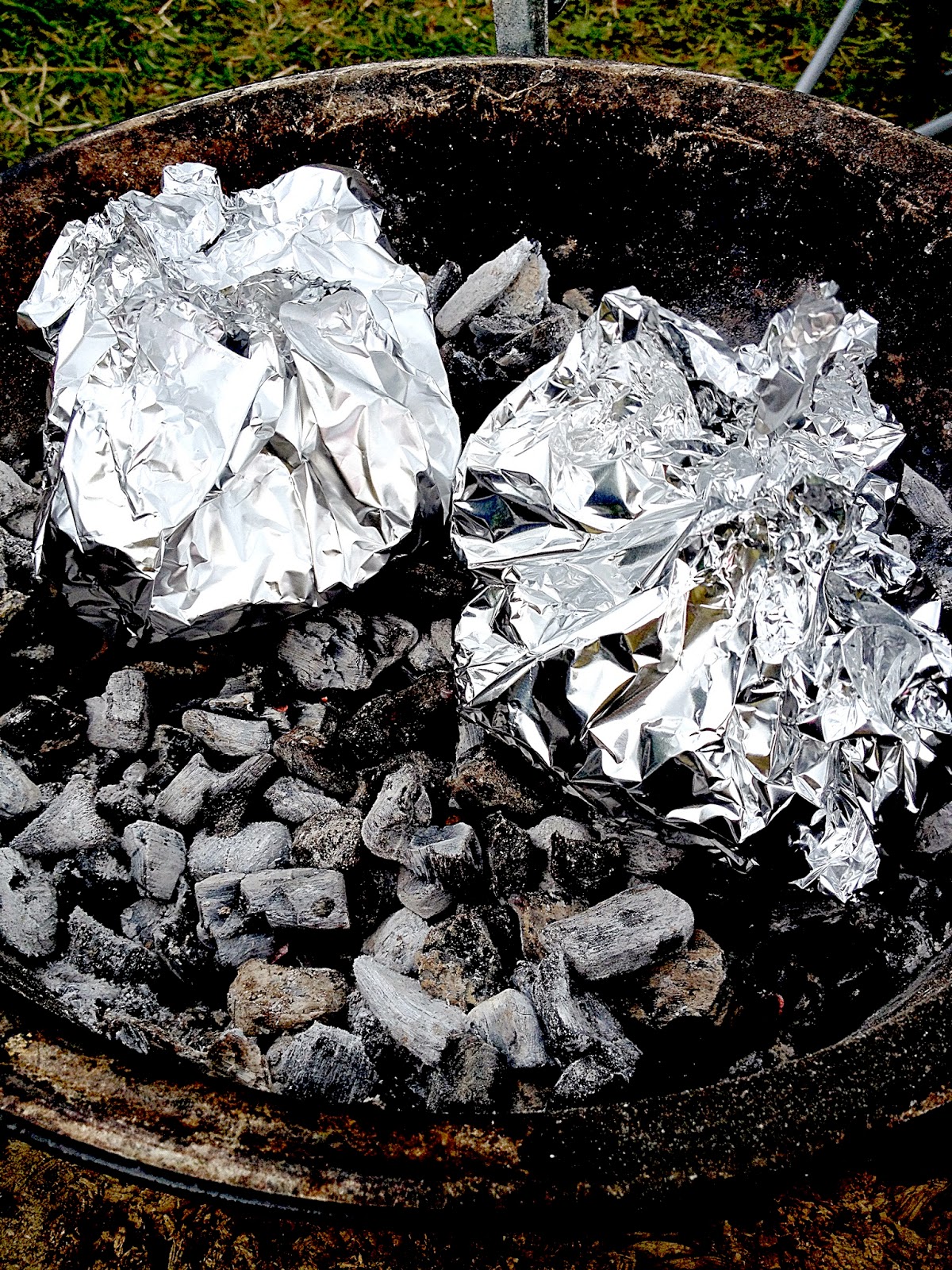 Cut up a ready made madeira cake into cubes roughly the same size as the pineapple chunks and add those to the foil.  Now form the foil into a a pouch scrunching the top to seal it all in. 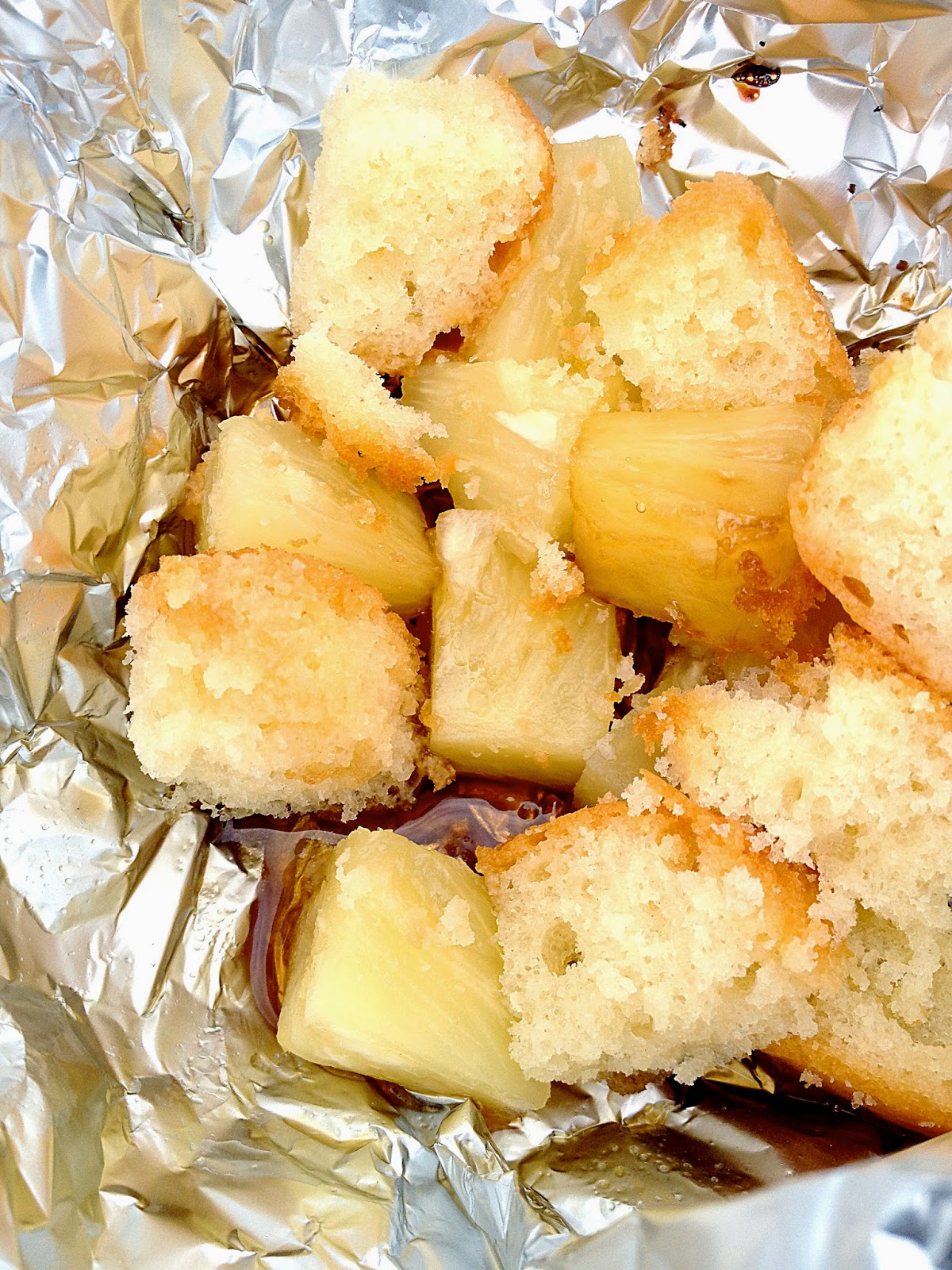 Place the parcels onto the hot coals for 2-3 minutes.  The sugar will melt and make a delicious syrup along with the juices from the warm pineapple and soak into the sponge.

A healthy blob of clotted cream finishes it off nicely. 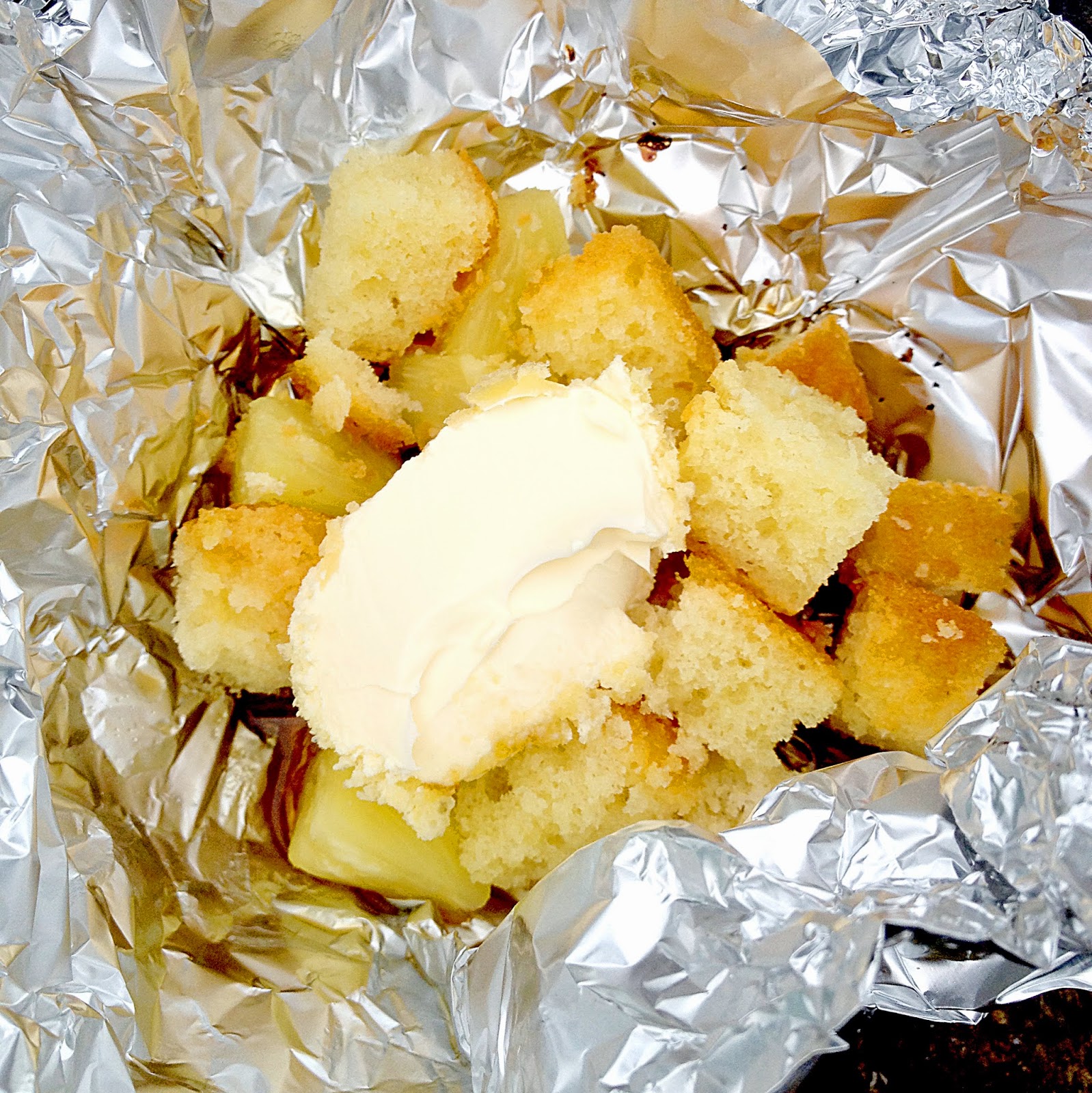 SNACKS - POPCORN
My children loved this one.  It's such a genius idea, why did I not think of this before!  We always have popcorn in and we all have our favourite toppings.  Icing sugar and cinnamon (I told you), Salt & Pepper, Peri Peri Salt, you choose.

Yet another use for foil - how did I manage without it!?  make a pouch with a double layer of strong foil and pour in a dessert spoon of oil, add a tablespoon of popcorn kernels and seal the pouch well making sure you leave enough space for the popcorn to pop. 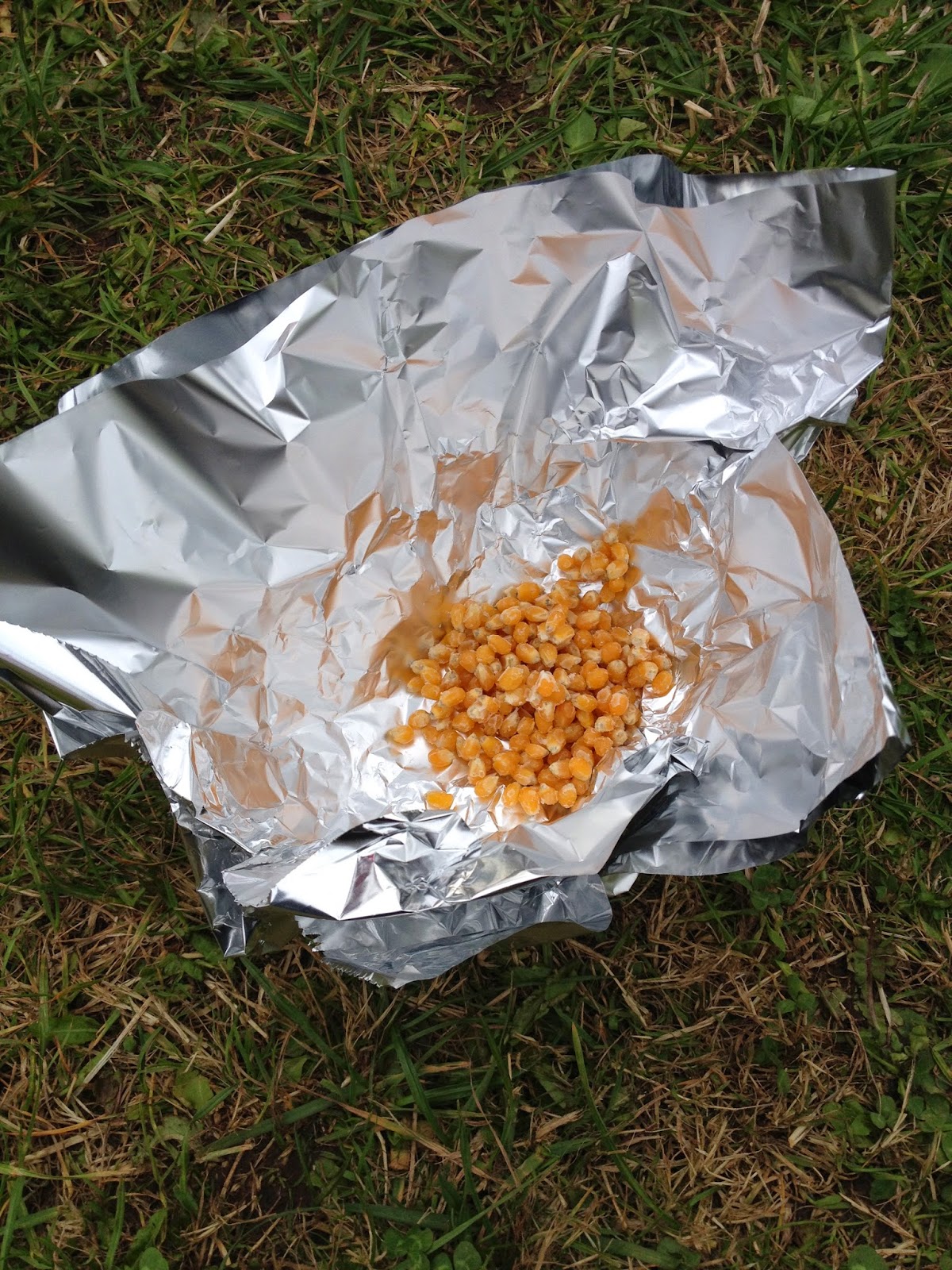 Stick the pouch into the coals and wait for the noise.  Use some tongs to give it a shake ever now and then till the popping stops then remove from the heat, unwrap and sprinkle with your favourite topping. 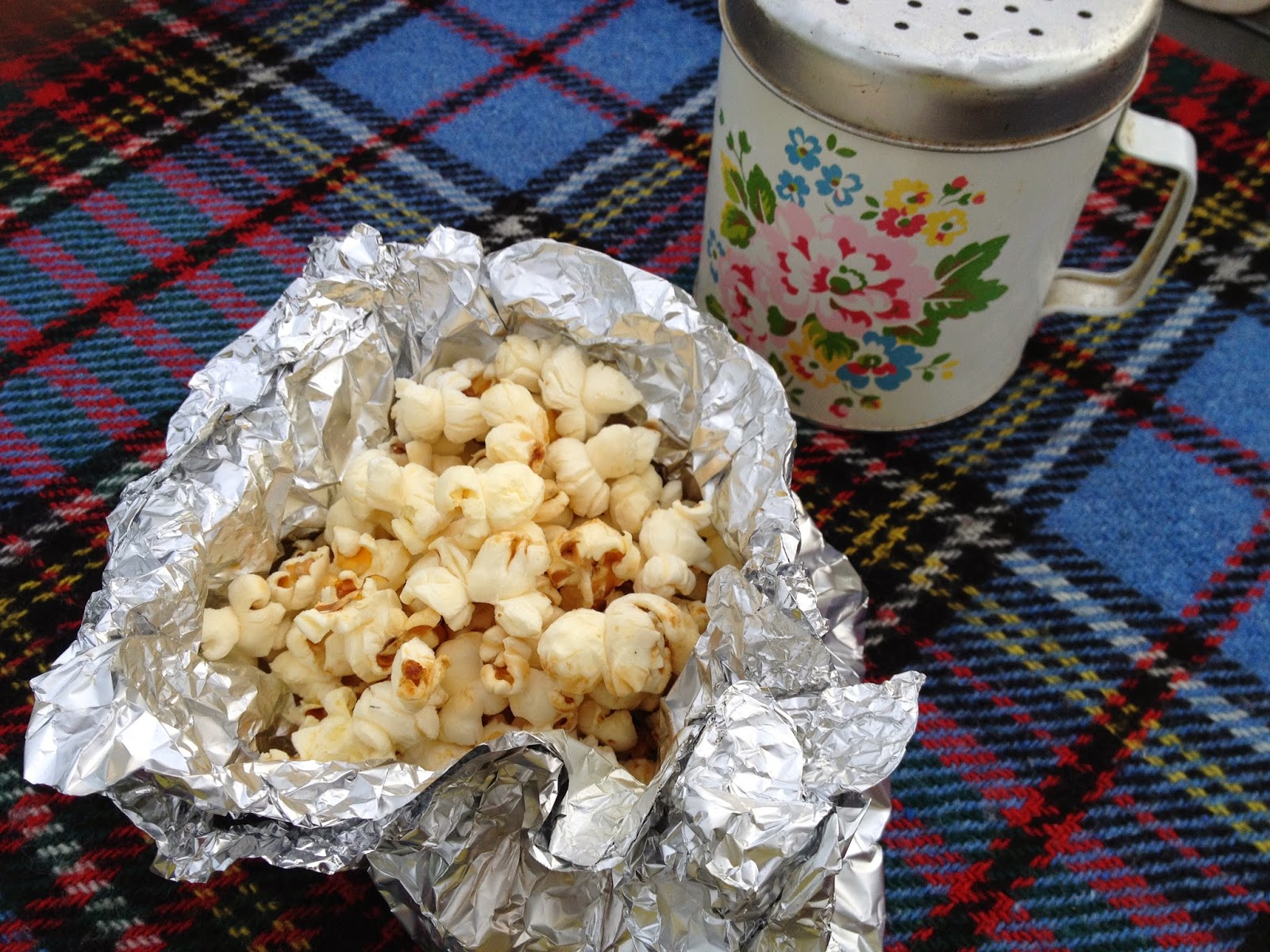 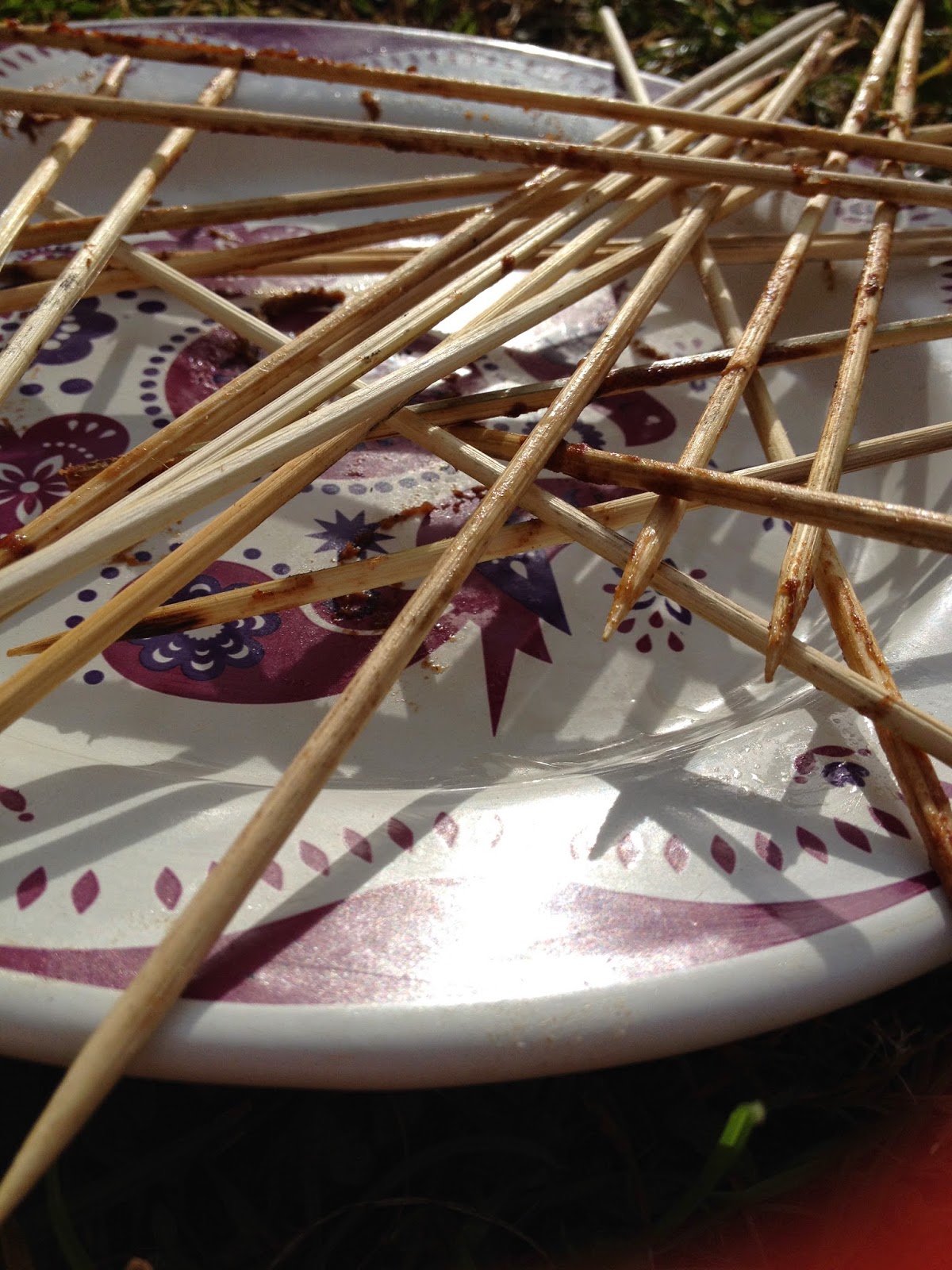 By yasminlimbert at 04:54 No comments: