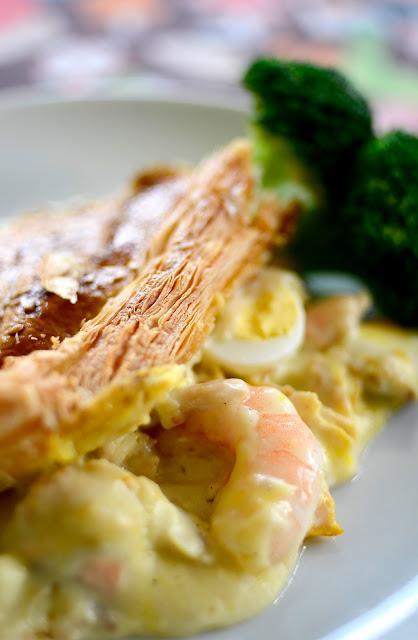 Well, week four was pie week, one I looked forward to but with slight trepidation.  I do like to make pies but not puff or flakey pastry.  I remember being asked at one of the interviews for GBBO2 if I made puff pastry.  I was honest and said that I had made it (at school in Home Economics) but I don't because basically life is too short when you can buy perfectly good stuff in the supermarket.  I have to say, Mary agreed!
Don't get me wrong, I make my own short crust and sweet pastry but puff takes a lot of time and effort which I just don't really have.
I made a fish pie which was one of the few recipes I didn't develop for the show - it is something I make regularly for my family and have done for years.  I think what makes it special is the addition of saffron and substituting boiled eggs for quails eggs.  Quails eggs taste just the same but look really cute.  You can put them in whole as well which means the yolk doesn't become separate.
This is enough to feed my family of five or 7 children 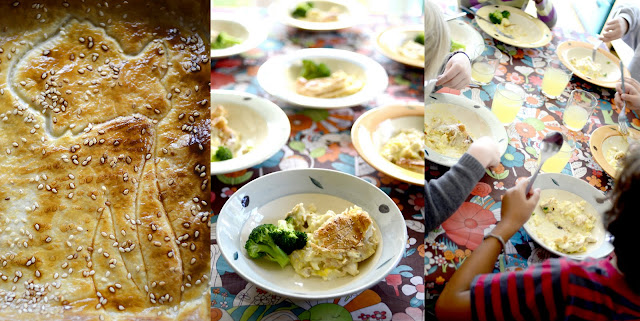 Get the recipe here
I still get a kick out of having my recipes on the BBC Food website, how cool is that!?
Meringue pie is also a favourite with us but for the show it had to be made in a 12" tin and trying to get that amount of liquid to set was never going to be easy.  I think everyone had issues with it apart from Mary-Ann who always goes large and in fact I seem to remember hers was even bigger, you go girl!
I'm sure the nation was questioning why no-one did good old Lemon Meringue, I agree, you can't improve on perfection, unfortunately the programme makers requested an alternative flavour.  I chose a peach and raspberry meringue pie.  Peaches and raspberries are a classic combination and I thought the colours would stand out.
Remember this recipe is for a 12" pie! 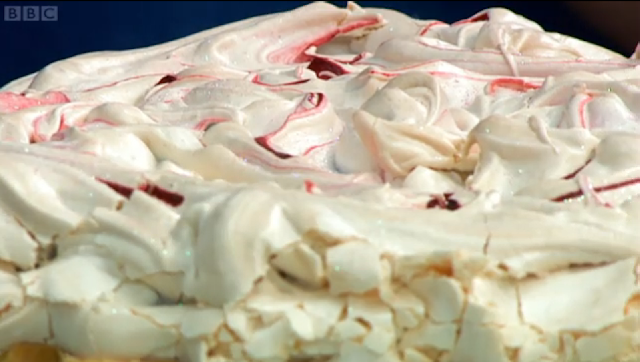 I have enjoyed re-creating the recipes from the show but I'm enjoying baking things just because I want to.  I made enough  pastry for extra pies - always make more that you need if you're going to all that effort, it can be frozen for another day.
I made these Turkey, Bacon & Leek Pot Pies.  My children love having a pie all to themselves, they feel very grown up, I just don't put as much filling in for them. 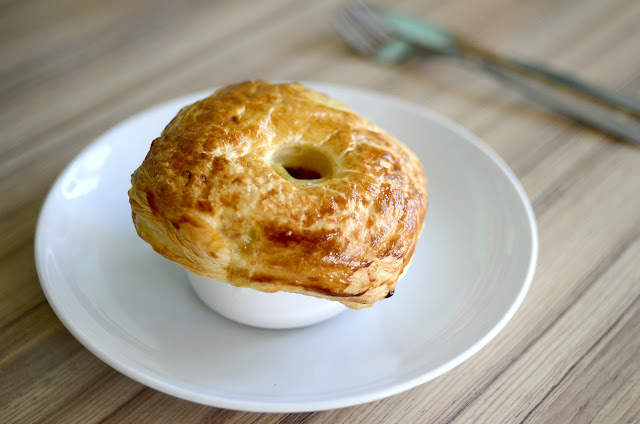 I used 375g Turkey Steaks cooked in a little oil. I then added 6 rashers of Streaky Bacon.  Remove them from the pan and cook 1 large leek.  I cut it down the middle then cut each one down the middle again and sliced it thinly.  Once the leeks are soft add them to the turkey and bacon. 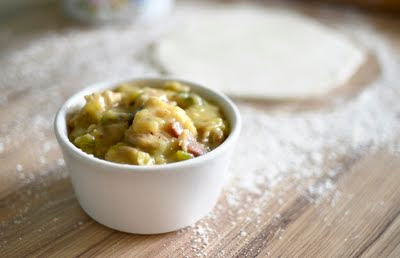 Now use the same pan to make a roux with 75g Butter and 75g Plain Flour.  Melt the butter then stir in the flour, once they form a doughy ball slowly add 1 pint of Chicken Stock.  Add it a little at a time continuously stirring to form a gravy.  Make this as thick or thin as you like, you may not need all the stock.  Next return the meat, leeks and any juices to the pan and combine them all. You can season it now with Salt and Pepper but be careful with the salt as even good stocks can sometimes be quite salty
Fill your ramekins or pie dish and top with the pastry, brush with an egg wash and bake for 25-30 minutes at 200C.
You can make the filling ahead and freeze it if you like.  I make the pot pies, put the lids on and freeze them ready for the oven. 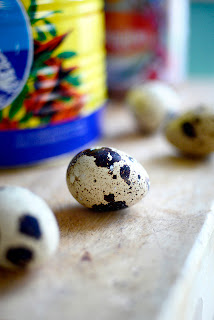